The Little Manistee River flows in a northwesterly direction for 67.1 miles from its headwaters in a series of swamps in eastern Lake County and portions of Wexford County at an elevation of 1206 feet above sea level eight miles east of the village of Luther. The Little Manistee River watershed drains 145,280 acres in Lake, Wexford, Mason, and Manistee counties. Below the dam in Luther, the river is free-flowing for fifty-five miles until it empties into Manistee Lake at the town of Stronach (elev. 602’ above sea level) making it one of the steeper gradient rivers in the Lower Peninsula. The state of Michigan has designated the Little Manistee a high quality “Blue Ribbon” trout stream, and it is an extremely important steelhead fishery as it is the only river providing harvested steelhead eggs (at the Little Manistee River weir below 6 Mile Bridge) for the state’s hatchery system which is the core of the entire Great Lakes steelhead stocking program. The river’s fishery is sustained by the natural reproduction of anadromous steelhead as well as resident populations of Brown (both introduced in the Great Lakes in the late 1880’s) and Brook trout. Chinook and Coho salmon from the Pacific were introduced in in the river in the mid 1960’s, and there is an annual fall salmon egg take operation at the weir begun in 1968. 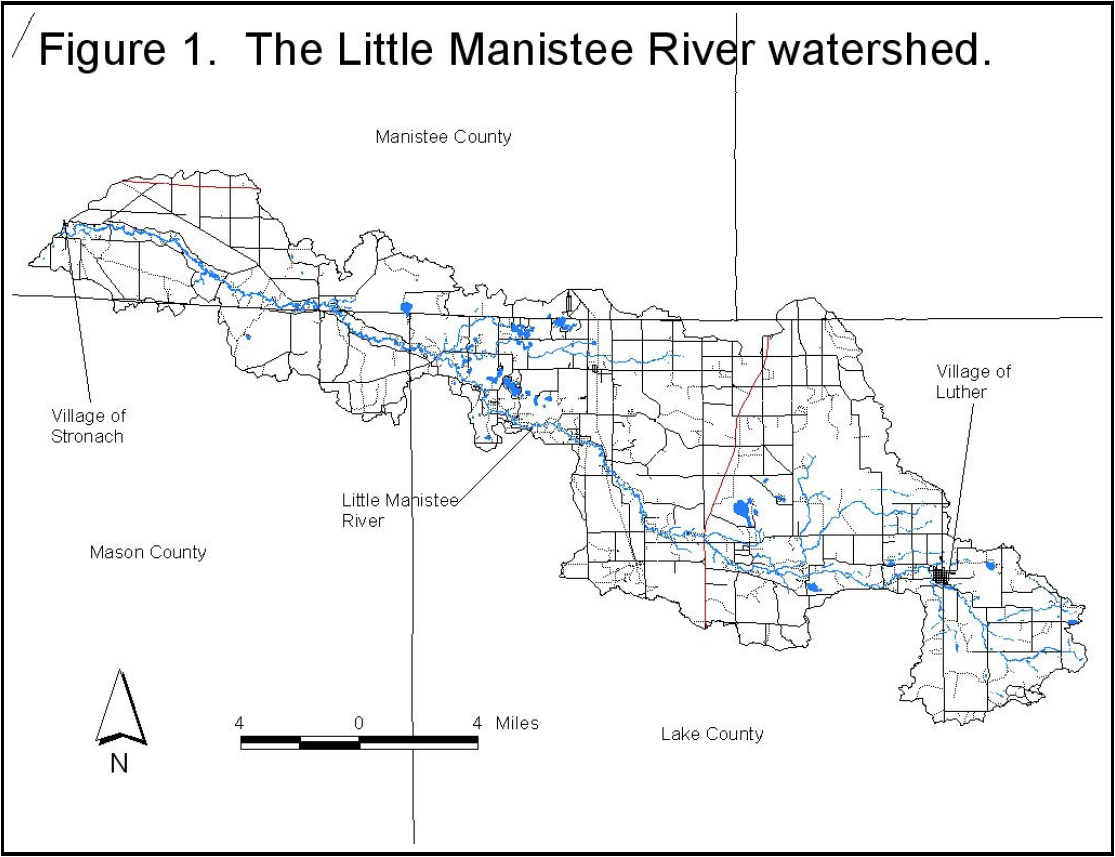 The river is one of the coldest and most stable streams in Michigan, due in large part to a groundwater-feeding system. Gravel substrate is present in the numerous riffles in the middle sections of the river, but shifting sand is the predominant stream bottom type in the upper and lower sections. Historically the river and its natural fish habitat have been degraded by the lasting effects of the logging industry of the late 19th and early 20th centuries, which resulted in sedimentation of the riverbed primarily from bank erosion, and while the eco-system slowly regenerated itself, and the land was naturally reforested, damage to the river remained. In the 1930’s crews from the CCC (Civilian Conservation Corps) began conservation and restoration practices building fish covers and planting large trees along the banks. In the mid-1950’s the Michigan Conservation Department (now the MDNR) began fish habitat restoration projects along sixty-one miles of the river, but subsequent riparian development and recreational use contribute to the continuing degradation of the watershed’s resources. The watershed area is primarily forest with scattered rural residential areas. There is some farmland above Luther and in the Cool Creek area. 53.2% of the land in the watershed is owned by either the state of Michigan as part of the Pere Marquette State Forest or by the United States Forest Service as part of the Huron-Manistee National Forest.

In the fall of 1986 the Luther Dam failed, and its reconstructed replacement failed in 1992. These events released tons of sand and sediment from the backwaters downstream as well as causing a “Once in a hundred years” flood, scouring the river basin and severely damaging he eco-system and the fishery.

In 1994, John Gorys and Howard Roberts, riverfront property owners on the Little Manistee River, were appointed by the U.S. Secretary of Agriculture to serve on a committee studying the desirability of having the Little Manistee River designated a “Wild and Scenic River.” In October of that year, they circulated a questionnaire to Little Manistee riverside property owners. The questionnaire provided valuable information concerning not only the Wild and Scenic River program, but also a variety of other land use principles which would protect the watershed without the national designation, and respondents were encouraged to consider and prioritize their concerns about the health and use of the river as well as means of protecting the resource into the future. Fifty-five percent of the respondents saw a need to “Organize private groups to implement erosion controls/habitat restoration, advise on wise use of properties.”

Since action on the “Wild and Scenic River” designation was unlikely, John and Howard initiated the process of creating a watershed organization to protect and rehabilitate the river. Its mission:

Is to bring together persons and organizations who have an interest in the resource conservation and restoration of the Little Manistee River and its watershed. Our goals are to restore, protect, and preserve the natural character of the watershed by communicating resource problems and then offering and implementing problem resolution. We are a state chartered non-profit, tax-exempt organization. All contributions are tax deductible under §501c{3} of the IRS code. Our business is conducted by a council of trustees elected by the membership. All positions are voluntary, non-compensated. (Revised 1999).

On April 27, 1996 twenty riparian owners met at the Elk Township hall. John Gorys presided at the meeting that determined the mission of the fledgling group would be the protection, maintenance, and restoration of the Little Manistee Watershed resources by seeking broad support from riparian property owners as well as private individuals and public and governmental agencies. At a subsequent meeting on the 6th of June, the organization was named the “Little Manistee Watershed Conservation Council.” The Board of Trustees was established on July 6th with board members Marion Belding, John Gorys, Gordon Lewis, Kaye MacDonald, James Mason, Dave McIntire, Karen McIntire, and Howard Roberts. John Gorys was elected Council president and Karen McIntire Secretary/Treasurer. The Council’s Bylaws (see appendix) were adopted on July 17, and Articles of Incorporation (see appendix) were finalized by Gordon Lewis and submitted to the state of Michigan on the 18th of July. The Council received its non-profit charter on August 18th, 1996. In December of that year, a partnership agreement was drafted and entered into by various units of government, business and private sector organizations interested in the well-being of the Little Manistee River Watershed moving into future. The agreement states:

The parties committed to this partnership are united by a mutual concern for the conservation and improvement of the water quality, fisheries, wildlife, forestry and free-flowing characteristics of the Little Manistee River; along with the belief that the restoration of this river will provide aesthetic, recreational, and economic benefits for the region and the state.

The impact and significance of the far-sighted and far-reaching goals and commitment of the first board members cannot be overly appreciated. The thoroughness of their early work providing focus, purpose, and structure to the organization has positively affected the health of the watershed and all who enjoy and treasure the resource. What they created and subsequently implemented and the principles that governed their efforts continue to guide and shape the Council.
While the administrative work was being completed, the Council was already acting on its principles. It filed for federal I.D. and 501c3 designation for tax exempt status. A membership solicitation resulted in 120 members, paying an annual dues of $20.00. A newsletter, “Little River News,” was circulated in December of 1996, and private donations that year totaled $1750.00. In addition, a grant of $16,000.00 was awarded to the Council by Michigan’s DNR Department of Fisheries for work on bank restoration.