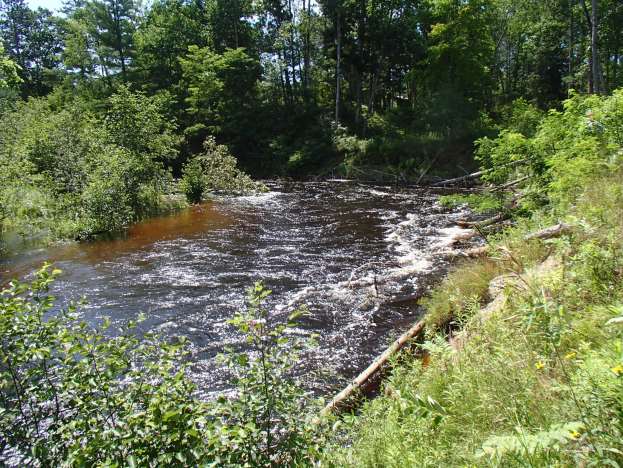 Little Manistee River Private Lands Sites: Before, During, After Flooding in July 2019

The projects illustrated herein were performed on privately-owned lands along the Little Manistee River. The sites are in Stronach Township, Manistee County and were identified through an inventory of eroding streambanks and bluffs contracted to Conservation Resource Alliance (CRA) by the Little Manistee River Watershed Conservation Council. Also, design and permit application work was completed by CRA with construction being performed by Kanouse Outdoor Restoration during July 2017 using materials from on-site.

In late July 2019, an extremely localized heavy rain event occurred partially in the Little Manistee River watershed and resulted in substantially higher flows than normal. Unfortunately, there no longer is a USGS gage station on the river so total discharge can only be guessed at. At any rate, it was enough to cause the river to access the floodplain and move wood debris and sediment within the channel in observable quantities. Photos taken during and subsequent to the event were taken by CRA staff to record the effect on the work described above.

In general, the work held up very well and performed the services intended. The exceptions are the lower-most downstream site (#60) at Grooters-Latham adjacent to an abandoned gravel pit. The white pines utilized were swept pretty neatly away by the river and may have something to do with the amount of hydraulic force that particular site is exposed to. Another factor may be the highly erodible material making up the bank, which sloughs very easily (as was observed by CRA during the flood). The other issue was the top Grooters-Latham site (#56) in which the actual top of the bluff settled due to the rain and pushed the toe of the bluff and installed wood out further into the river.

The MDEQ (now “EGLE”) permit for the Grooters-Latham site is still valid and will remain so until September 2021. If funds are available, CRA recommends going back in and shoring up #56 and replacing the material at #60 with larger diameter wood as well as the finer material originally installed. The level of flow, while not unprecedented, was obviously not expected so soon after installation. If #60 had more time to “season”, the structure would, in all likelihood, have held. 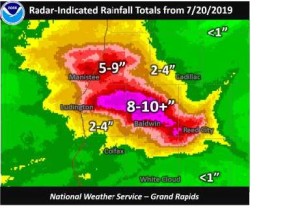