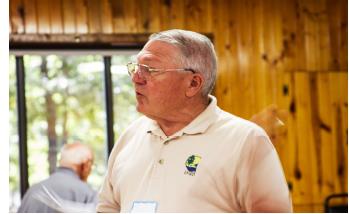 This past year was a really challenging one as the wet weather and high waters in the river kept us from being able to complete several projects. For a brief period in August it let up enough to make it possible to work the Syers Dam removal project. It took almost a month and a half to de-water the pond and remove the deteriorated earthen berm then replace it with a culvert. Several delays were caused by the continuous wet weather however the contractor pushed through it all and did a wonderful job of helping restore the creek to its natural and consistent flow rate. The annual macro-invertebrate study was delayed and a second one completed later in the year because of the high flow rates limiting access in the river during the first one. Overall the results were very satisfactory indicating once again a healthy “bug” population that helps support a healthy fish population.

Our work on continued erosion remediation projects has been on hold as the high water makes “in-stream” and bank restoration ineffective as the type of structures cannot be properly installed until water levels are normal to low. Don’t ask me, I do not know the engineering aspects of it all; but have been assured that’s the way it has to be in order to get it done right.

We are planning on completing several delayed and now three or four additional sites this coming year. When we complete these sites we will have completed work on all the major and moderate sites we have been able to get permission from the land owners to do. A total of some 32 sites will have been completed just over a four year period.

Also we have contracted for CRA to conduct a second erosion survey in the spring as it has been over six years since the last one and with this past year’s historic massive rainfall and flooding we anticipate there will be several more sites needing attention. The work never stops; but we all do what we can to help keep the river healthy.

Another area where we have had success is that we now have completed our Watershed Management Plan and are submitting it to the state and federal governments for formal approval. By enacting the WMP we feel we can be more competitive in securing grants that will fund a more diversified array of projects that will support protecting and preserving the river. We are currently pursuing a major FGHP state grant that will allow us to rework a major section on the river that due to several factors has resulted in loss of proper habitat that supports in turn a healthy and flourishing fish population. Finally, we have proceeded with an educational effort to better explain the state Natural Rivers Program and the possibility of the DNR pursuing such a designation for the Little Manistee. We are currently taking a survey of people and organizations who have in the past shown interest in what the LMWCC does. The results will be given to the director of the program indicating what level of agreement there is in support or not of the DNR pursuing the designation. It would then be up to the state to proceed or not as they wish. Well that is about it in a short form; once again the Board of Trustees of the LMWCC could not accomplish any of the varied things we do without the help of our membership both financially and through volunteer efforts. We are all in the same place in supporting our goals of preserving, protecting and enjoying our precious resource The Little Manistee River. Please feel free to contact us look us up on on Facebook as well.

Wishing you a joyous season to all,