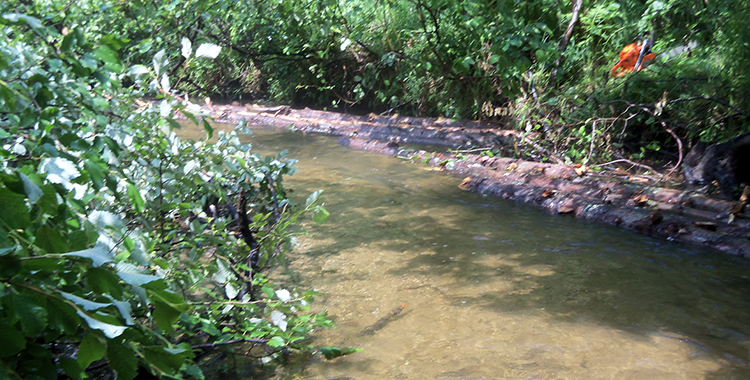 Since 2012, the LMWCC has been working to improve fish habitat in Syers Creek, a tributary of the Little Manistee River. The below report has been put together by one of our partner organizations, Conservation Resource Alliance.

Introduction
The following is a report of fish species surveyed by electrofishing a section of Syers Creek below the Syers Lake Dam in Lake County, Michigan. The survey was performed to determine the fish species present in the creek prior to the removal of the dam, which occurred in August 2019.

Study Area
The location in which fish were surveyed in 2018 and most recently in 2019 is a section of first-order (Strahlers, 1957) creek channel that lies downstream of an earthen berm dam which impounds naturally occurring Upper and Lower Syers Lake. This location is approximately two stream miles upstream of the confluence with the Little Manistee River, a cold water trout stream. The surveyed section is characterized as being of low gradient, intermittent flow, shallow and narrow with primarily a sand bed substrate, though pockets of silt, leaf litter, and coarse particulate organic matter are common. A difference between 2018 and 2019 survey conditions was the presence of higher discharge in the creek channel as opposed to the extremely low flow with isolated pools of slightly deeper (12”) water in 2018 due to the plugged water control structure. The study reach was 300(+/-)’ in length as measured from the top leading edge of the approximately 4’ diameter corrugated metal pipe (cmp) that served as the dam water control structure outlet. A tape measure was run roughly along the course of the creek until the desired footage was achieved.

Methods
Shocking commenced at approximately 1100 hrs. on 17 June 2019 under clear skies and an ambient temperature of 62° F. Water temperature was 61° F and creek flow was moderate with good water clarity. An ETS Electrofishing Systems, LLC Model APB 12-volt battery powered backpack shocker was employed and fish were captured via dipnet-equipped anode handled by the shocker operator and multiple assistants with dipnets. Total shocking time, voltage and amperage settings were not recorded as the unit was giving some trouble to the operator and much time was expended adjusting settings to get the proper configuration for rolling fish. Fish were collected and held in a 5-gallon bucket filled with creek water until the entire 300(+/-)’ section was electrofished. Water was refreshed in the bucket to provide optimal dissolved oxygen conditions. Representatives of each fish species captured were identified, enumerated, photographed and noted, and subsequently released.

Results and Discussion
Because the water control structure in the dam was cleared of debris, discharge downstream into the stream channel was higher in 2019 than in 2018. Consequently, more stream channel was available for shocking. When flow is present the size of Syers Creek below the dam is, as mentioned above, most associated with that of a first order stream, and reflects the condition and size of the creek on the day of the survey. Channel width varied between 1.5’ and 3’ with depth of water ranging from 6”-12”. The greatest depth observed occurred in the handful of pools that also happened to be the only locations in the reach where electrofishing could occur in 2018 due o the limitations posed by the gear.

The fish species observed during the 2019 survey are not dissimilar to those surveyed in 2018 with the exception of the presence of common shiner, largemouth bass, tadpole madtom, and yellow perch and the absence of central mudminnow. The presence of young-of-the-year (YOY) coho salmon again indicates some nexus between the point of capture and the point at which adult coho salmon may ascend Syers Creek and successfully spawn. Since no suitable spawning substrate (i.e. gravel) exists in close proximity, either the young-of-the-year coho salmon swam upstream to the point of capture or a pair of coho salmon utilized substandard spawning habitat in the vicinity and their progeny remained proximal.

The remaining species, which are native to the region (coho salmon are non-indigenous), are generally found in habitats not unlike that of Syers Creek (Hubbs and Lagler, 2004). Tadpole madtom and Iowa darter are commonly found in streams with soft, muddy, and/or sandy bottoms and along with largemouth bass, blacknose and northern common shiner, and yellow perch, feed on aquatic invertebrates (and small fish when considering tadpole madtom, largemouth bass and yellow perch). Pumpkinseed are known to crush snail shells to extract sustenance while northern redbelly dace are omnivorous. Tadpole madtom are well known for the venom introduced via pectoral fin puncture wounds.

Farther downstream on Syers Creek, the Michigan Department of Natural Resources (MDNR) and the US Forest Service (USFS) have undertaken discretionary fish population surveys upstream of the confluence with the Little Manistee River. Both the MDNR and USFS efforts resulted in higher catches of cold water species (Salmonidae, Cottidae) than were found by CRA in the upper section.

See Table 3. Fish species surveyed by USFS between M-37 and confluence with the Little Manistee River

The diversity of fish species illustrated in the three tables above diverges from that normally associated with a cold water fluvial system and is explained by the presence of the eutrophic lakes at the upstream end of the relatively short creek. Warm water fish species entrained through the dam at Syers Lake likely followed the water as it receded downstream during periods of little or no flow. The ability of the creek to consistently provide habitat to cold water species (Salmonidae, Cottidae) occurs somewhere between the two crossings of M-63 whereupon groundwater spring influence and/or cold water tributaries mitigate the warm water surface discharge from Syers Lake. The data below obtained by the USFS and CRA provide a snapshot of conditions in Syers Creek, limited in its usefulness as a source of statistically significant information but provides some insight into the primary driver in determing fish species assemblages.

Conclusion
Upon removal of the blockage at Syers Lake Dam, the creek flow will more consistently (dischargedependent) occupy the full width and length of Syers Creek below the dam. In the years to come, annual fish surveys will provide an opportunity to asses change if any to the fish assemblage downstream of the dam and should inform similar projects in the future.